California DMV 1650 Waiver Packet | Guide  – The 1650 waiver packet which is currently known as the 4007 form falls under the “Termination of California DMV’s Suspension Action based on Out of State Residency” application. It is very common to have visitors driving in California or California driving license holders moving to other states. However, they might not be in the right position to satisfying the terms set forth by the Department of Motor Vehicles (DMV). Which is also hard to remove the driving privileges hold. The DMV only accepts alcohol programs to be completed in California, hence accept to lose your privilege to drive in that state.

Some people get arrested in California while having a license issued by another state. The police are not allowed to take this type of license in case of a DUI. But you still have to comply with the charges.

What will happen is: the California DMV will suspend you from driving in its roads and this will be reported to your license state. Different states have an agreement they make with each other, the Interstate Driver’s License Compact (IDLC).

This type of agreement can impose suspension or revocation of the driver’s driving privileges in the home state. These penalties might be similar to those in California or enhance these penalties and fines imposed by the California courts and DMV.

This will only happen if the home state recognizes a DUI conviction or suspension the same way as California.

There are cases that occur when one was moving out of California and unfortunately pleads guilty to a DUI. These are rare cases that make one wonder if it is necessary to remain in the state and complete the programs proposed by the courts or the DMV.

What you need is an SR22 when you move to another state. You must be responsible and maintain the SR22 just the way you would have in California.

Apart from that, you should ensure that your insurance policy covers for the California’s liability minimums- required by law.

When you are allowed an out-of-state DUI Program, complete the court requirement, waiting out the suspension period and still can’t get your driver’s license privileges, then your case is special. To be on the safer side, if the court accepted an out-of-state program, make sure that the classes must be taken in California to meet DMV requirements.

The California DMV 1650 waiver packet – is a document that allows out-of-state licensees to drive in California. It is mailed to the licensee at an out-of-state address. You will only get a California license after 3 years of filing for the waiver.

You will require a utility bill or required document by the California DMV to prove that you live out-of-state. Currently, you will be given only one chance in a lifetime to qualify for the 1650 waiver. It will be allowed if you have already filed for an SR22 with the DMV.

You will get your license back after 3 years and if you have completed the California DUIP class. If you are granted the 1650 waiver, then during this 3 years period you will not be allowed to obtain a California license. You can request for the application of the waiver from the Mandatory Actions Unit of the DMV in Sacramento, California.

What are requirements for 1650?

Requirements for the application packet of the 1650 waiver:

If you are in possession of this type of waiver, you are free from the California hold on license or index number. The mail you will receive in your address will inform you on:

When your DUI program requirement is dropped, you do not have the need of filling for an SR22.  If the California DMV places a hold on your license you might not get a license when you move to another state.

How to reinstate the driver’s license?

To get a valid license, you will have to appear in front of a judge and get a permission to take an out of state DUI program that is approved by the California DMV.

This method will help you get your license back with ease. In most cases, California DMV will not recognize an out of state or on-line DUI program- the court and DMV requirements are different.

In cases like these, one may require an attorney’s advice since it involved two states. You are thus required to have DUI knowledge of the two states and also the agreement they have in relation to your case.

The process needs patience since the MV Mandatory Actions Unit takes a while to respond to calls and requests. When DMV receives the forms, it will take them about 4-8 weeks to process your request for a 1650 waiver packet.

We recommend that you request a packet about 1 month before your suspension period is over.

Other tips on 1650 Waiver Packet

The 1650 Waiver is thus important when you want to reinstate your license when you are not capable of providing the proof of completion of a DUI program. If you get a license hold in California then you will not be allowed to get a license in your new state of residence.

When you are granted the California DMV 1650 waiver packet after proving that you are now a resident of a new state, then you have a made a promise that you will not drive again in California for a 3 year – period.

You should note that the waiver is for the mandatory alcohol program requirement, but they have to carry an SR22 insurance obtained from California. In case you are moving back to California and you want your driving license back – then you will be required to meet the DMV requirements first.

To get deep into this scenario, we may want to know the nature of the California DUI Laws and requirements.

One is entitled to penalties because he or she has committed a DUI Misdemeanor. This is as a result of driving under intoxication or influence of substances.  This will become a felony when the court, during the hearing, discovers that you had a criminal history during the arrest, you had a passenger under the age of 14 during the arrest, and you were involved in an accident, you were over-speeding or if it is your fourth or more prior DUI conviction. 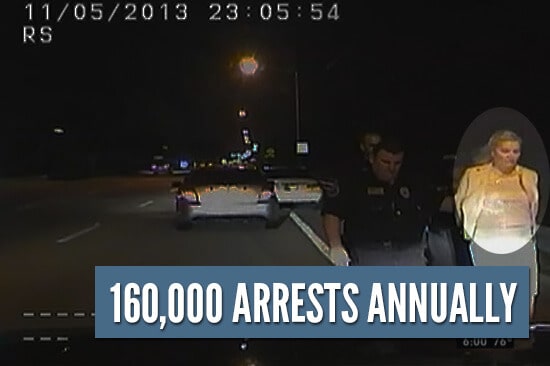 There are over 160,000 arrests happen annually in California

The penalties for felony and misdemeanor are different with the later getting minor punishments. For a Misdemeanor case, the blood alcohol content or BAC during your arrest will prove your innocence. California considers impairment when one records a chemical test of BAC 0.08% or higher.

This amount of alcohol content is unlawful in California, especial when you are driving a vehicle. The police officer has the mandate to arrest you and take your license too. You will be aware of your constitutional rights.  Then the officer might ask you some questions. The implied consent appears when you refuse to take the available chemical tests.

Minimum and maximum penalties for a first DUI conviction

The probation period for a first offender is between 3 to 5 years. Do not violate the requirements. The standards include:

Minimum and maximum penalties for a second DUI conviction

Minimum and maximum penalties for third and fourth offense

You’ll get to experience tough penalties. You will have to pay restitution to the victims.

If this crime happens within 10 years of the 3rd offense then the law requires to serve a jail sentence of 180 days. Like the rest, person entitles to fines, assessments, penalties, and probation.

4 years of driver’s license suspension. You need to perform an 18-month alcohol education program.  A community services are necessary.

Your experienced DUI / DWI defense attorney may help you reduce the charges on these convictions. But a misdemeanor is rather lenient than a felony.

There are a couple of scenarios that revolve around the California DMV 1650 waiver packet which include:

In all the scenarios one can conclude that it will be hard to convince the DMV on the issue of completing the AB 541 Program from outside the state. The AB 541 is 3-month first-offender DUI Program which may cost you a fee of $480.00.

The cost for the programs may range from $200 to $3000 depending on your type of violation and court order.

The aim of this discipline to:

You enroll in this program if you have a court order. The court allows the 32+ hours-online-program but not the DMV. This will put you under:

Second and subsequent DUI offenders must complete an 18-Month Program which requires:

For a third and subsequent DUI offenders, they must complete a 30-month DUI program which requires:

With all said and done, Select Insurance Group is your partner when you need assistance in obtaining an SR22 insurance. Need it in California?

Just fill out our short quote form.  We can find the best coverage to help you reinstate your license with ease.

About the Author: Select Insurance Group